What Causes an Intermittent Power Outage and How to Solve It? 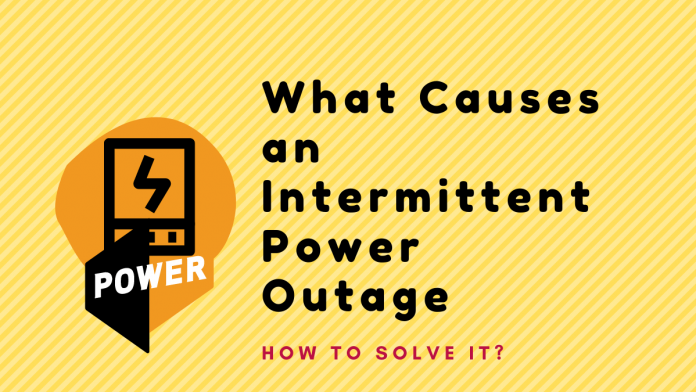 We all have an idea about the intermittent power outage, right? It is quite usual for a home or company to lose some of its electricity in some areas or for the power to cycle on and off periodically. It’s what we colloquially know as a “partial outage.” The reasons for this can range from a trip circuit breaker to a faulty connector or a loose wire at a service lead.

What is an Intermittent Power Outage?

A faulty connection is usually at an electrical box or device along the circuit. Again can also be at the panel or on the power company’s line to your house.

This causes a complete set of lights and/or outlets to stop working for a period of time.

Its trigger can be by a temporary short circuit. Short circuits happen when anything, such as

When this happens, specific electrical equipment automatically opens and closes the breaker two or three times.

Each attempt may result in a brief outage. These brief interruptions make you deal with a lengthier outage.

The majority of power outages are brief. There are many that may last seconds or minutes after they began.

For example, the Northeast blackout of 2003 knocked off power to 50 million people from New York to Ottawa, Canada’s capital.

Each of them has a unique cause and is marked in a unique manner.

A permanent fault is a type of intermittent power outage in which a fault in the power line is the main cause. These are simple and straightforward to resolve:

The main cause of brownouts is usually due to a loss in electrical voltage or a drop in the overall electrical power supply. The word for these types of outages comes from the dimming of lights that occurs as the power sags.

A blackout occurs when an area loses all electricity. This is the most serious sort of power loss. It affects a significant number of people across a wide area.

Blackouts typically occur because of substantial damage to electrical generation facilities, such as,

These are particularly difficult to repair fast – this is why, in the worst-case scenario, blackouts can linger for many weeks.

Rolling Blackouts are distinct from the other three because they are scheduled power disruptions. These are typically in use where the grid is unstable. Again, when the infrastructure cannot accommodate the people it serves.

Rolling blackouts can also occur when there is insufficient fuel to run power at full capacity, whether for a short or lengthy period of time.

In the event of a power outage, an uninterruptible power supply (UPS) provides continuous power to computers and controllers. Because they have very limited storage. They will never be able to maintain a plastics processing facility operational in the case of a power loss (they are only after all a rechargeable battery and a rectifier).

While UPSs are insufficient for machines, they are in use to protect computers (and servers) from data loss and corruption. For example, I am using one on this computer right now to cover the unusual event of a power outage in my neighborhood.

A UPS will survive for a long period, be easy to operate, and secure data.

As a result, the intermittent power outage is a type of phenomenon which may result due to some technical aspects. But, loss due to it can be minimized with some steps.

I hope you enjoyed my ultimate guide to what causes an intermittent power outage and how to minimize it.

Now I’d like to hear from you: do you power outages often? What do you do when the lights go out?