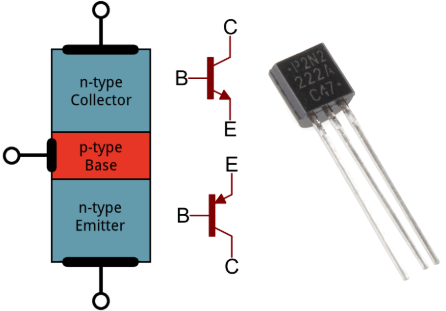 Transistor working principle: A transistor is one kind of semiconductor device that is used to amplify or switch electronic signals and electrical power.  A transistor is very simple and also complex. The transistor can work either the amplifier or switch.

At the time of amplifier, it takes low electric current at one end and produce much bigger electric current at the other in the output. It’s one kind of current booster. That comes in extremely valuable in things like portable hearing assistants, one of the primary things individuals utilized transistors for.

The hearing aid has a tiny microphone in it that picks up sound from the world around you and turn them into fluctuating electric current. These are fed into a transistor that lifts them and forces a small amplifier, so you hear a substantially louder form of the sounds around you.

A transistor is a three terminal device.

Actually, the basic idea of the transistor is used to control the flow of current through one channel by varying the intensity of a much smaller current that’s flowing through a second channel.