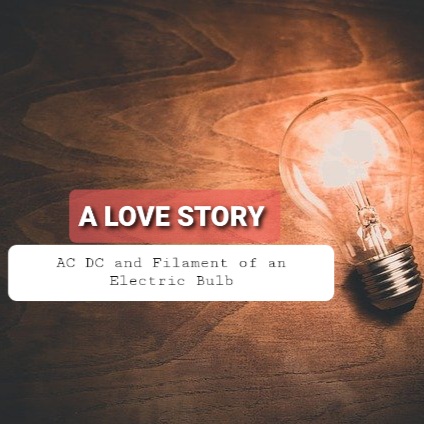 It’s raining outside. The atmosphere is gloomy. Holding a cup of hot coffee, I am enjoying the rainfall. Suddenly, my attention is shifted to the electric bulb in the room. At once, a question arose in my mind that what would happen if 220 Volt (DC) is applied in this 220 Volt (AC) rated electric bulb? So, let us explore this topic more elaborately, shall we?

What kind of load is an electric bulb or an incandescent bulb?

Many of you are thinking  that this is a very easy question, is it? Let’s find out the reality. You all may say, it is a resistive load as the filament works here as a resistor. The filament of an electric bulb is not purely resistive. It contains a very high impedance. By impedance, we know,

As a result, this filament doesn’t only have a resistive quality but also has inductive and capacitive quality. Among these, the resistive quality is very negligible. Resistive nature of filament varies with the variation of power rating of bulb. But it is very less compared to the reactive quality of the electric bulb.

What is the reason to design a filament in this way?

Because we know, sister resistance doesn’t like brother AC. Resistance has no effect on AC. But, sisters named capacitive reactance and inductive reactance both love big brother AC dearly. Brother AC has a great impact on them. As a result, the manufacturing companies give preference to the reactive component more while manufacturing the incandescent light bulb’s filament.

Now if 220 Volt DC is applied then what will happen?

Now, the age of the resistance of the filament is very less (low quality). So the affection of big brother DC towards this resistance is very tremendous (flows through it easily). Again, too much of anything is not always good. As a result, it harms the filament. There is a possibility of the breaking of the bulb.

What will happen if 220 Volt AC is interchanged with 220 Volt DC in a tube light?

This situation may cause more havoc. Now, a tube light with a starter is a very inductive device. As we have discussed earlier, sister inductive reactance doesn’t like DC at all. In the case of DC, the starter or inductor acts as a short circuit. Because we know, inductive reactance,

Now, as the frequency is zero in the case of DC, the inductive reactance is also zero. Thus, the tube light acts as a short circuit.

As a result, one thing you have to remember all the time that an AC rated bulb can never be changed to DC. If it were actually possible, then the experienced manufacturers would’ve themselves put the mark of 220 Volt AC/DC on the packets. And, if you really are curious to light up a DC bulb, then DC bulbs can easily be found in the markets. These are purely resistive bulbs. So, there won’t be any problem if you use DC in them.

Well, how has time passed, hasn’t it? My coffee is also nearly finished. The rain has also stopped. Now, there is pin-drop silence in the atmosphere. The sky has also turned dark. I think I should turn on the electric bulb. But not applying DC only the AC.