How Do ACs Work? Air Conditioners a Marvel or Menace! 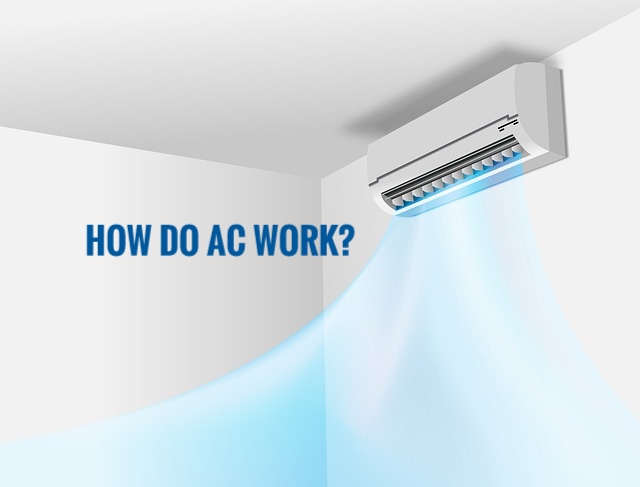 It is summer now. You’re feeling the summer heat. Now, what is the first thing you do? You switch on the machine that makes all the problems go away: your air conditioner. Air conditioners pull off some seemingly magical feat. They make the air inside a home cooler.

Air conditioners give you much-needed:

After reading today’s article you will be able to learn:

Let’s find out how the air conditioners work.

How Do ACs Work?

In order to know how do ACs work, you have to know about its components first.

The first step of how do ACs work begins with setting your thermostat to the temperature you desire. This triggers the condenser fan and compressor to turn on. Typically Air conditioner Thermostats are of 3 kinds:

Things to know about mechanical thermostats:

The compressor begins pumping a fluid called a ‘refrigerant’ throughout the system.

The fan inside the condenser is a vital part of it. It helps with the process of releasing the heat. A condenser is the outdoor portion of the whole Air conditioning setup. Its work is to either release or collect heat depending on the season. The condenser can not work properly without the fan.

The refrigerant leaves the condenser as a medium-temperature, high-pressure liquid. Then, it flows to the metering device. In this case, there is a use of a thermal expansion valve. A pin inside the valve adjusts the flow rate of the refrigerant. It depends on the temperature at the evaporator end. The metering device uses a ‘sensing bulb’ for this process. As it flows through the valve, its pressure drops significantly, releasing a low-temperature, low-pressure liquid/vapor mix.

The lower pressure allows room temperature air to boil the refrigerant. The chilled refrigerant then flows through the evaporator coil. This is where the cold air comes out from. Here, it absorbs heat. The coil inside the room is the evaporator.

The blower begins circulating air throughout the house. It is a key portion of the air conditioning system. It produces air movements.

Then the room-temperature air passes through the return duct. It then arrives at the filter to remove particulates.

Let’s go through the process again:

The fundamental principle of an air-conditioner

FollowIng are some conditions:

With these conditions, the continuously flowing fluid will absorb the heat from the room. Moreover, eject it out to the surroundings. This is the fundamental rule of an air conditioner.

How a Mosquito is the Inventor of Air conditioners?

Believe it or not, but you have to thank mosquitoes for the invention of air conditioning. We can deem them as its forefathers!

No one loves them in the 21st century. But, back in the 19th-century mosquitoes were a real nightmare. They carried around different infections, such as malaria.

The steps to the invention of Air Conditioners:

How are today’s Air Conditioners different from Willis Design?

What is the Best Refrigerant? Is it good for the Environment?

A refrigerant needs to have the following qualities,

This narrows your choices of chemicals.

Scientists thought they’d found the perfect refrigerant with Freon. The trade name of a group of chemicals by the name chlorofluorocarbons. But CFCs are the actual murderers of the ozone layer.

The replacements for freon are hydrofluorocarbons or HFCs. HFCs don’t damage the ozone layer, which is good!

But they have a different problem. They’re greenhouse gases. So the search is on to phase out HFCs too.

Hydrofluoroolefins are less rough on the climate than HFCs. But, they are also very expensive.

The world is getting warmer. But, as humans, we thrive to stay on the cooler sides. This led to the invention of a menace. It goes by the name of air conditioners. Trying to stay cool adds up to the rising temperatures. According to a study, the total installed capacity of air conditioners will rise threefold by 2030. Its effects are far more adverse to the environment than we can think of. Moreover, air conditioners emit pollutants like hydrofluorocarbons into the atmosphere.

The most surprising potential replacement is CO2. CO2 totally works as a refrigerant. It is way less potent than HFCs.

There is a report that 27 percent of all global warming will be due to the gases from air conditioners by 2050. By 2050 the world’s air conditioners would be using the current electricity capacity of the US, the European Union, and Japan combined. 16 of the 17 warmest years on record have occurred since 2001. So, is there no hope at all?

This data should serve as a warning for times to come.

What is the solution?

We all should work at a rapid pace in order to offset the grave impact of air conditioning on our environment.

I hope you enjoyed my ultimate guide to how do ACs work.

Now I’d like to hear from you: What do you think about the use of Air conditioners? Do you think they are bad for the environment? Can you live without them?

Donate Us
Share
Facebook
Twitter
Pinterest
WhatsApp
Previous article
How Internet Works Step by Step | The Crazy Long Journey of Data Packets
Next article
How Clutch Works in Car? The Magical Pedal You Didn’t Know About!