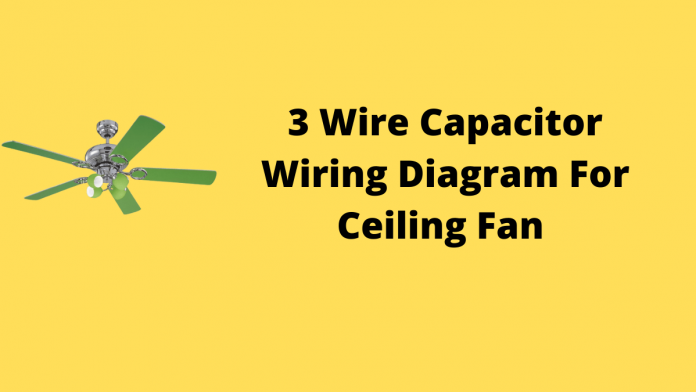 Why We Use Capacitor For Ceiling Fan?

A wrong conception goes on lion portion of electrical engineering student’s mind that, the capacitor is utilized in ceiling fan for storing electrical charges. Storing charges is not only the function of the capacitor. It can also create a rotating torque in a ceiling fan or an induction motor. Let’s clear the concept of torque.

The “Torque” term is greatly used in applied mechanics. The intention of rotating with a full circle is known as torque. If acting forces on a system are in an equilibrium position there will be no tendency to rotate. But when the resultant force is not in equilibrium position or not zero there will be an intention for rotating around 360 degrees. Actually, this is the mystery behind rotating any object.

Our Rotational Toque Vs Wind

Now, I am going to share a nice instance with you all. We can rotate around 360 degrees in the open environment. But why? We can easily overcome the frictional force of the air. Because our force is greater than air. So, the resultant force is above zero. That’s why we can easily rotate. Now, I think the concept of torque is clear to all. Now come on to the main point.

Similiarly, we can consider this fact in single phase AC supply. In ac signal at first positive cycle comes and create magnetic force respectively. On the contrary, same amount of magnetic force is created in opposite direction when negative cycle comes. Hence, the resultant force is zero. According to the above torque concept, the motor inside ceiling fan will not gain any force to rotate. So, the fan will be in static position if there is no capacitor. Now, a vital question is peeking on your mind that, how torque will eradicate this equilibrium state?

How Capacitor Helps To Create a Rotating Torque?

We all know that, while a capacitor is used in a circuit current leads voltage by 90°. This means there is a phase difference between voltage and current. That’s why the equilibrium position will be removed and the rotor will gain a magnetic force indeed. As a result, the ceiling fan will rotate with it’s rpm (revolution per minute).

After knowing the performance of the capacitor our eager mind wants to know how to connect a capacitor with a ceiling fan simply. Usually, we use a 2.5/3.5 microfarad capacitor in the ceiling fan. In order to wire a device by observing a diagram, you have to know the function of the components also. Then it will be very easy to connect a device to a power system.

For more clear realization I will show the winding connection circuit separately. Let’s see in the above picture:

If you have any question regarding 3 Wire Capacitor Diagram then you can comment.

When a low voltage is supplied to a fan or motor, what happens and why?