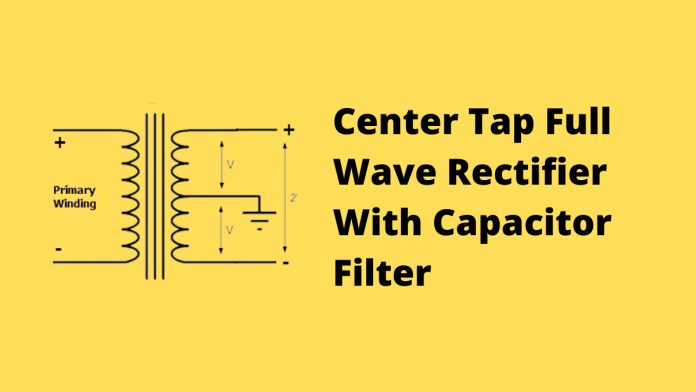 We have already known about Bridge Rectifier With Capacitor Filter in our previous article. I am going to discuss another way to rectify an AC signal. This is center tap full wave rectifier with capacitor filter. What is center tap full wave rectifier? How it will rectify an AC signal. Let’s know the pros and cons of this topic.

What is Center Tap Full Wave Rectifier With Capacitor Filter?

The milestone of utilizing a rectifier is to convert AC signal to DC signal. But the device arrangements may be unique in this case. In the bridge full-wave rectifier circuit we use four diodes and arranged a bridge network for rectification purposes. But in this case, we use a center tap transformer and two diodes for the rectification process. Besides, there is a capacitive filter circuit for filtering the ripple quantity of the output signal.

Why it is Called Center Tapped?

Suppose, you have a fruit cake. You take a knife and cut the cake into two individual pieces through its center. This instance is comparable with a center-tapped transformer. There is a wire that is connected to the center of the secondary winding of the transformer. This acts as a neutral wire. In fact, there are two individual secondary voltages. Here you can compare the neutral wire with a knife, secondary winding with cake and the two individual voltages with two pieces of cake. How interesting fact! Have you ever thought in such a way? This is the basic reason why this transformer is called so.

Look at the above picture. Here a short line is connected to the center of the secondary winding. If we measure voltage between half winding and neutral point the actual voltage will be 200V. So, as a result, the voltage will be 400V. Here 400 volts is divided into two individual and equal volts. After realizing the center tap transformer fact, I hope the center tap full wave rectifier action will be easier to you.

When Positive Half Cycle Comes:

When Negative Half Cycle Comes:

In the above picture, we can see rectified DC output. Does it seem really DC signal? No, actually the output isn’t pure DC. The rectified output bears a little ripple quantity. There is also an AC signal which ought to be filtered with a view to achieving pure DC output. This actually is like filtering sand from table salt when it is extracted from the water of the sea. Here we use a capacitive filter circuit for filtering purposes. You can compare the rectified output with table salt, ripple quantity with sand, and filter with the capacitor.

How does a Capacitive Circuit Filter The Ripple Quantity?

What is Relay? How To Draw a Simple Relay Wiring Diagram

Conversion of Ammeter to Voltmeter