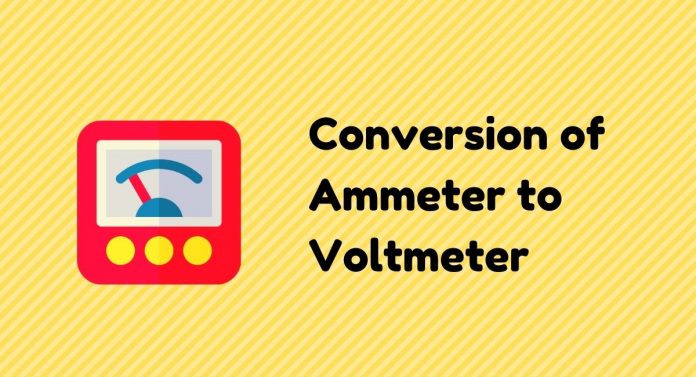 We all are familiar with ammeter and voltmeter. We measure current by ammeter and voltage by a voltmeter. At the time of measurement, the ammeter is connected on series and the voltmeter on parallel. Today we will discuss the conversion of ammeter to voltmeter.

And we know, the resistance of the short circuit is almost zero. As a result, we can’t measure current and it will be harmful to the circuit. But if we connect it on series, it will be 0+R=R. Then load current will be shown in the ammeter.

What is the reason for connecting the voltmeter on a parallel?

The resistance of the voltmeter is high. It is close to infinity. So if we connect it on series instead of parallel it will absorb all the voltage. We won’t get perfect voltage across of load. That’s why it’s connected on parallel. As voltage drop stays same on parallel despite resistance value. So voltmeter will show the volt measured by load/register.

Now an interesting question. If we transform the ammeter into a voltmeter, can we measure the volt?

Transforming Ammeter into Voltmeter / Conversion of Ammeter to Voltmeter

Obviously, the ammeter can be transformed into a voltmeter. And the process is easy. We know that the internal resistance of the ammeter is almost zero. It means the way is very smooth.

On the other side, the resistance of the voltmeter is high, which can be considered as infinity. But after considering it as infinity it still has a value and it is very high. But then why it is called infinite? Suppose, those who like to eat a lot, we call them foodies. But they also have a capacity that is more than others. Then we have to increase the load value of the ammeter for transforming it into a voltmeter. So we have to connect a load of high value with the ammeter.

So the load will be in which connection? The load is almost zero for the ammeter. For easy calculation, we are taking the value zero. Suppose, the load of the ‘Q’ value will be connected in parallel with the ammeter. So the total load is Q-0/Q+0=0 ohms. It means the value remains the same.

Now if we connect it on series the total load is Q+0=Q ohms. That’s why we will connect the load in series with the ammeter.

That’s all for today’s topic conversion of ammeter to voltmeter.

Hope it was helpful for you to understand the conversion of ammeter to voltmeter.

You can also read: What is Relay? How To Draw a Simple Relay Wiring Diagram

Why is DC Supply Used in Substations?