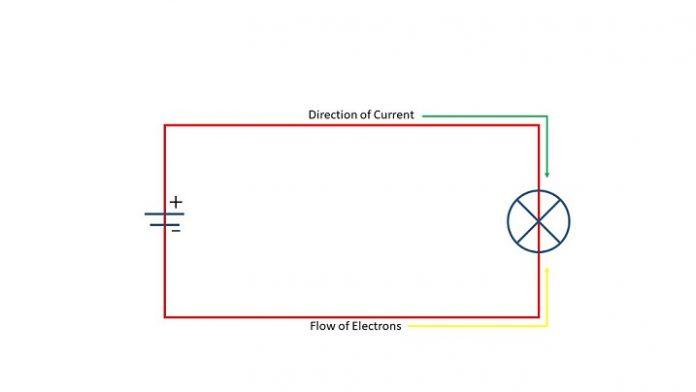 Direction of current flow and electron flow- why are they opposite to each other?

No matter how much research we do about voltage and current, people just can’t get enough of it. The people are always curious regarding it. Moreover, most curiosity arises about why electron and current flow opposite to each other? In short, their flow must be towards the same direction. That is, the current must travel in the same direction as that of the electron. But, it is not the concept in this case. Why so? Have you ever wondered? Well, it is one of the extensively questioned terms too.

So what is the reason?

In this case, what is comparable to the throwing of the stone?

Here, the throwing of the stone is the voltage. Voltage deviates the electrons from its conductor. Current is induced due to the potential difference at the two points of the conducting wire. And, this flow takes place from high voltage to low voltage.
Again, this whole concept can be beautifully explained using an example. Let us suppose, there are two water tanks. The first tank is filled with water. The second one is half-filled. Now, if a pipe is connected between them, the water will surely flow from the first tank to the second.
So we have understood that current is flowing from the high voltage level to the low voltage level.

Basic Concept of Electron flow through a Dry Cell

But why is the direction of current flow the opposite?

Old Concept of the direction of current flow

New Concept of the direction of current flow

Later, electrons were discovered. This discovery led to confusion in the above-stated concept. Because this electron moves from the negative end to the positive end of the conducting wire. Meanwhile, a lot of people already believed in the ancient concept. They believed that the current flows from the positive to the negative end. Now, this concept was not changed. Two of the concepts were kept. Now, by combining both the concepts, a single concept was proposed. The flow of current and the flow of electrons are opposite to each other. If there is still any confusion remaining regarding the matter, let’s learn using two practical incidents.

Fish swims in a lake. In the direction in which the fish swims, the flow of the lake water is opposite to it.
Now, consider the fish as an electron and the lake’s flow as the flow of current.