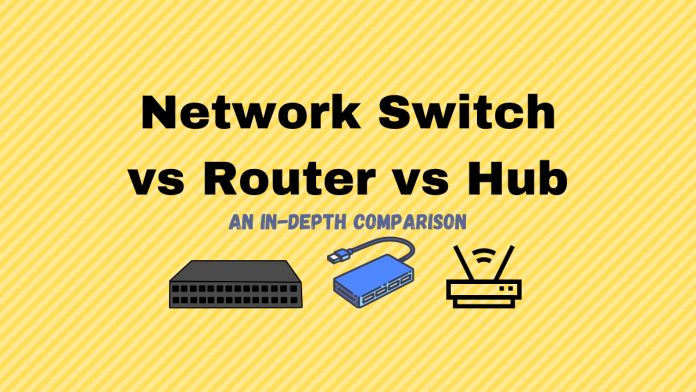 This article will cover an in-depth comparison between network switch vs router vs hub. So, tech enthusiasts, this article is for you.

Network Switch vs Router vs Hub

We’re going to talk about a network switch vs router vs hub. Now, all three of these devices are similar, but there is a difference in the way they handle data. The fundamental difference between a hub and a switch is the way of delivery of frames. The router operates on the OSI model’s network layer. There can be Multiple connections of Ethernet Devices as a single segment by a hub. A switch can easily connect multiple devices inside a single LAN. Moreover, a router may connect both LAN and WAN networks.

So, we’ll first talk about a hub. Let us first understand about hubs from network switch vs router vs hub. Now, the purpose of a hub is to connect all of your network devices together on an internal network. It’s a device that has multiple ports. It accepts Ethernet connections from network devices.

A hub is considered not to be intelligent because,

The only thing a hub knows is when there is a connection of a device to one of its ports. So when there is an arrival of data packets at one of the ports, it is copied to all of the other ports.

As a result, all the devices on that hub detect that data packet.

Again, a data packet comes into one port. Then the hub will just rebroadcast that data to every port that has a connection of device to it.

Now, even if a computer only wants to communicate with a specific other computer, any other computer in the connection would still receive the data. Even though that data was not for them. As a result, this causes loss in bandwidth. Again, there are security concerns too. This creates network traffic that is not necessary.

The basic mechanism of a switch is very similar to a hub. A switch is a device with many Ethernet ports just like a Hub.

The main difference between them is that unlike a hub, a switch is intelligent.

In this case, unlike a hub the data packet only transfers to the computer connection the sender wants to. Whereas a hub will just rebroadcast the data to every port.

For example, a switch can easily transmit data to a computer that the sender wants to. Here, the switch looks through the MAC Addresses in its register and finds the ideal match. Then it sends the data to the correct recipient.

So that’s the major difference between a hub and a switch. As a result switches are far more preferable over hubs. Because they reduce any unnecessary traffic on the network. A hub can  only detect a device in physical connection to it. On the other hand, a switch can detect specific devices in its connection. Because it keeps a record of the MAC addresses of those devices.

Hubs and switches exchange data within a local area network. For example, in your home network or in a business. They do not have any use to exchange data outside their own network, such as out on the internet. There is a reason for it. Here, to exchange or route data outside their own network to another network, such as out on the internet, a device needs to be able to read IP addresses. Again, hubs and switches do not read IP addresses. So that’s where the router comes in.

Read about What is Computer Networking

Now a router does exactly what its name implies.

Suppose, we have a private network with a router. Let us assume it to be the ‘red network’ (Red in color). Again, there are different other data packets, by different colors like yellow, blue, green, etc. These colors indicate different IP addresses. Now, they will try to enter the red network’s router from the internet.

Take the previous four colors for example, red, yellow, blue, green. Each network has their own router. Now let’s see how a router operates.

So in a nutshell this is how routers work. So in conclusion, hubs and switches are used to create networks while routers are used to connect networks. Now, among network switch vs router vs Hub, the best device that is in demand right now is the router. Its functionality is not very hard to grasp. Nowadays, in the age of Wireless Fidelity (WiFi), the use of routers is far more relevant than the hubs and switches. So, in terms of network switch vs router vs hub, router is the one that ranks in the top for network and connectivity works.

I hope you enjoyed my ultimate guide to network switch vs router vs hub.

Now I’d like to hear from you: do you use a router? Do you like the hub or the switch?