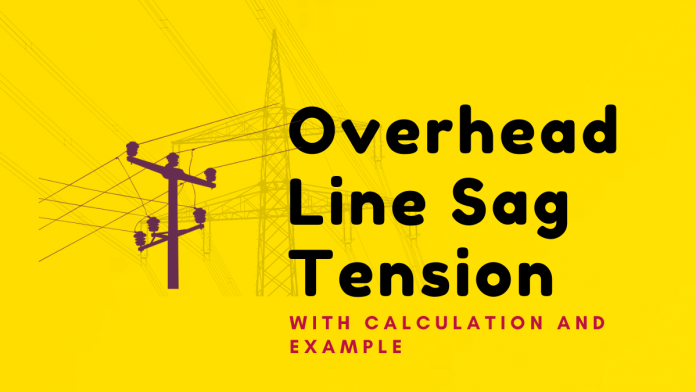 This article will try and cover the topic about overhead line sag tension with calculation and example. If you belong to the electrical engineering world you must have questions regarding overhead line sag and tension. So, what do you know about sag?

Before you get to know about sag, first learn how it is set up. An easy way to describe it is using an image. Suppose, A and B are two Points or you can also consider them two Transmission Towers. The vertical difference in level between the two points A & B (or, transmission towers) and the lowest point of the conductor is also what we can define as sag. The span of the overhead conductor affects the computation of sag and tension in a transmission line.

Some design engineers assume that the curve is parabolic for ease of analysis. The parabolic approximation is true only when the sag is minimal in comparison to the span length. It is common on distribution lines. Despite the complication of the formula, it is always advisable to use catenary calculations.

If the lowest point of the curve above is the origin, the following equation can also be in use to model it:

The catenary constant is effectively the ratio of the horizontal tension in the conductor to the unit weight in the absence of wind.

When estimating sag in a transmission line, there are two conditions:

The formula for calculating sag changes depending on whether the support levels (i.e., the transmission towers holding up the overhead conductor) are at the same level or not.

The sag calculation for supports is set to equal levels.

Assume AOB is the conductor. A and B are the support points. Point O is both the lowest and the midpoint.

Let, L denote the length of the span, i.e. AB

w is the conductor’s weight per unit length.

We’ve chosen any point on the conductor, let’s say P.

The distance between point P and the lowest point O is x.

y is the distance between points O and P.

We get by equating the two forces at the point O in the image above,

Assume AOB is the conductor with point O as its lowest point.

L is the conductor’s span.

h is the height difference between two supports.

x1 is the distance between support at lower level point A and O.

x2 is the distance between support at upper-level point B and O.

The weight per unit length of the conductor is denoted by w.

When the conductor is in still air and the ambient temperature is normal, the above formula can compute sag. As a result, the conductor’s weight is its own weight.

What Impact Does Ice and Wind Have on Sag?

Ice can take on a variety of physical shapes in the conductor. They are as follows:

When the conductor is subject to the wind, the total unit weight of the conductor increases. This  causes the catenary curve to alter shape. Line design engineers must account for potential excessive loading in the area while calculating sag-tension.

Under these severe loading circumstances, the conductor and supports may fail. It may also exceed the electrical clearances that are necessary.

The following are some of the effects of ice and wind on sag:

Assume that w is the conductor’s weight per unit length.

The weight of ice per unit length is what we know as wi.

ww is the wind force per unit length.

As a result, the conductor’s total weight per unit length is,

The conductor’s sag is achieved by,

So, the vertical sag,

Why is sag in transmission line cables necessary?

The conductor’s sag determination is done by:

I hope you enjoyed my ultimate guide to overhead line sag tension with calculation and example.