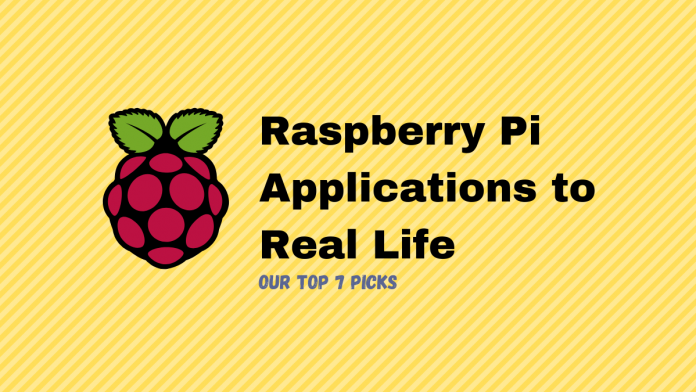 Today let’s talk about the raspberry pi and its applications to real life. Raspberry Pi is a miniature PC alternative. Today, we will unfold all the mysteries behind it.

The things that we will convey today:

What is a Raspberry Pi?

Raspberry Pi is a small computer. It works with the motive of bringing the amazing opportunities of the Internet of Things (IoT) to the palm of your hands. It is the size of the palm of your hand. Their marketing policy is that it is the size of a credit card. In a practical sense, it stands up to it. A Raspberry Pi is a low-cost but efficient device. What does it offer?

Can you install any OS on Raspberry Pi?

The installation of the OS is not out of the box for Raspberry Pi. You need to install an OS afterward. Without considering it a downside, you can look at it as an opportunity to choose from a variety of Operating Systems. Some of the OS that Raspberry Pi supports are:

There are a ton more Operating Systems to choose from. Among all these Operating Systems the one that works well by keeping the RAM usage to the minimum is the Rasbian OS. Again, if you wish to operate the Pi with a Windows desktop feel, then Windows IoT might be for you. Moreover, the RetroPie is for all the Retro game lovers out there. If you wish to convert your Pi into a Retrogaming setup, then this will be it. TwisterOS is pretty famous for providing a solid experience.

What kind of SD card does Raspberry Pi use?

The in-general external SD card is the system requirement for the Raspberry Pi.  The Raspberry Pi supports an SD Card with a maximum capacity of 32GB. You can also use a high-capacity SD Card. But in this case, you need to convert it to FAT32 format. Because the Pi supports only FAT32 SD Cards.

Now, the preferable SD Card would be the Samsung Class 10 UHS-I with speeds of 95MB/s. Such SD Cards provide rigid and sturdy support for a flawless experience. The choosing of an external card is very important. Because you need to install the main Operating Systems in it.

How do I prepare a micro SD card for Raspberry Pi?

The main Operating system for the Raspberry Pi installs on the micro SD Card. The Pi only recognizes SD Cards that are in FAT16 or FAT32 format. So, most people recommend using a 32GB card. But, you can also use a higher capacity SD Card. In this case, converting it to FAT32 does the trick.

The steps for a perfect Raspberry Pi boot:

The Evolution of Raspberry Pi

Now, despite the deliciously deceiving name Raspberry Pi’s aren’t any food. They’re for computing and programming. They are so small that they could get stuck in your

teeth. The largest Pi is about the size of a deck of cards and the smallest being slightly larger than a stick of gum.

Despite what it looks like it has everything a normal-looking computer has. It has everything for the connection with a monitor, keyboard, mouse, the Internet, etc. But, not all pies are the same. There are several different versions. Now, let’s introduce the family of Pi’s before you,

Introducing the PI zero. It is the first in the family. The size of it is super tiny. It’s great for projects that have very little extra space. Moreover, it’s also the cheapest of the bunch at only $10. It doesn’t have much computing power.

Model A is like the middle child of the family. It can neither be as cute as the older one nor can it be as powerful as the younger ones. In the end, it gets left in the middle. But, it is a big step up for the Pi models, it has a dedicated HDMI port, ethernet support, and many more. In the end, it is not the perfect one.

The youngest of the bunch. Research states the human height is shrinking in comparison to the previous generations. Just the opposite is prevailing here. The Pi gets bigger with a more important spec bump. The Model B has everything one asks for. The Raspberry Pi 3 and 4 are the newer ones of this series. They have 2 USB 3.0 ports, 2 USB 2.0 ports, HDMI port, USB type C port, Gigabit Ethernet, the newer model supports two 4K displays.

How does the Raspberry Pi work?

The Raspberry Pi works quite differently than any device you might use. It does less power consumption. It utilizes only 3 watts of power. Keeping this in mind, you can use 30 Raspberry Pi’s instead of a single electric bulb. An SD Card works like the hard drive for the Pi. You can install the OS you want on the SD card and operate with it. Again, you can connect the Pi with a TV, any monitor using an HDMI cable. It works just like any desktop. You can add keyboards, mouse, etc. The Raspberry Pi comes with a dedicated GPU, USB ports, HDMI ports, and all the other things you will get on a desktop.

So, we got what a raspberry pi is and how it operates. Now, it is time to know about the Raspberry Pi: Applications to Real Life.

The application of raspberry pi is usually for different scientific projects. Moreover, it’s in use as a desktop PC as well. Not sure if you can say that it can be your daily driver. Because the Pi supports Linux operating systems mostly. It does have the Windows IoT OS, but that just doesn’t do the trick. Now, you might be wondering, so why do you need a Raspberry Pi? What are its applications to real life?

We will present to you the top 7 best Raspberry Pi Applications to Real Life below.

So, are you a workout freak? If you are then this project is for you. The Raspberry Pi along with the help of some sensors will guide you through your intense workout sessions.

It detects your exercise precision. You can use its help to count your movements. It will serve as your personal trainer but at a cheaper cost. This project works with push-ups, jumping jacks, and toe taps. You can also add your desirable exercises.

Things you will need besides a Raspberry Pi 4

This even detects your heart rates. You can check it in Real-time using a monitor.

So, you think your home is not safe? Try using the Raspberry Pi for a change.

This may look like a very futuristic approach. But, building a smart mirror using a two-way mirror tv and Raspberry Pi is possible.

With the help of a geophone sensor and raspberry pi, you can create an earthquake detector at your house. You can do this at a very low cost. This seismometer helps measure the ground movement during earthquakes.

Are you worried about the weather outside? You can’t rely on native mobile apps? Using a raspberry pi and some sensors you can yourself create your very own weather tool. It can detect outside weather and provide analysis. All of this is at a very cheap price to pay.

Are you a plant lover? If you are, then you must have a plant at home. Now, if there ever arises a situation where you forgot to water them, then what might happen? It may cause serious problems. But, worry not. This project can easily solve your problem. Here, using some sensors and raspberry pi, you can keep account of when to water the plants. It automatically notifies you to water the plants.

If you are looking for cheap tablet options, then this might be it for you. You can use a raspberry pi, a 7 inch LCD display panel, and some other devices to make your own tablet at a very reasonable price.

These were our top 7 picks for Raspberry Pi Applications to Real Life.

I hope you enjoyed my ultimate guide to Raspberry Pi Applications to Real Life.

Now I’d like to hear from you: do you use raspberry pi? Which tip from today are you going to try first?