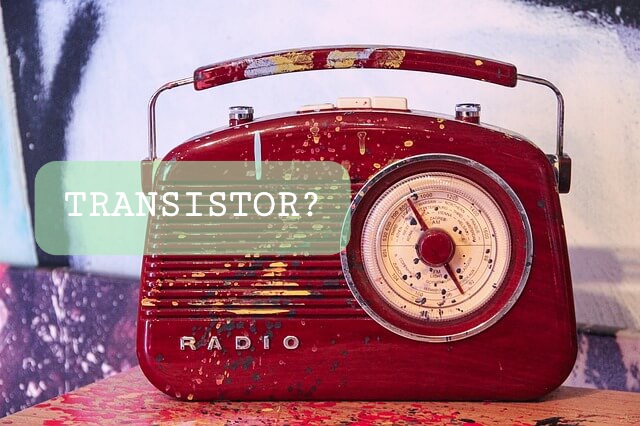 What does a transistor do? If you know what a transistor is, then this question might have popped in your head. We can remember or memorize something using our brain. Similarly, the computer can remember the information and commands you give. In this case, you can say we have brains so we can do it. But the computer is not a human, it does not have a brain. How can it remember commands and information? Your brain has about 100 billion (ten trillion) cells. These are called neurons. It is because of these cells or neurons that you can remember something through your brain. Computers also have billions of mini “Brain Cells”. These brain cells in the computer are what we know as transistors. These transistors are a complex combination of silicon. Now let us learn, what does a transistor do?

Functions of a Transistors

Simply put, a transistor is a tiny electronic component. It can do two different things. The transistor can act as an amplifier or as a switch.

Transistor acting as an Amplifier

When a transistor acts as an amplifier, it receives a small electric current at one end. Again, it produces a much larger electric current at the other end. In other words, its job is to boost the current. This current boost function was first used on our telephone line. Telephones and mobile phones have small microphones. It boosts the electric sound waves coming from different parts of the world by transistors through that small loudspeaker. Again, we can hear it as we speak.

Transistor acting as a Switch

Transistors can also act as switches. There is a small electric current in one part of a transistor. It can create a much larger electric current flow in the other part of that transistor. This method is what people use to build computer processors. A transistor is divided into two parts. It can store two different numbers, these are zero and one (binary number). There are billions of transistors. As a result, a computer chip can store billions of binary numbers. Moreover, at the same time remember other common numbers and letters.

You can open old machines with a screwdriver. There you can see with your own eyes, the building process of these machines. But, the devices of the present age use a different technology. It is in the internal parts of the devices. So, you cannot see it with the naked eye.

The job of a transistor is to control the movements of one electron. So, you can understand how small a modern transistor is. A modern computer chip is the size of your finger.

What do Bipolar Transistors mean?

In a bipolar transistor the current flows through two types of carriers.

Now, as the current flows by two carriers, it is called Bipolar Transistor.

Again, the transistors in which electricity flows through any one carrier are called unipolar transistors.

There are three parts of a Unipolar Transistor. These are:

Emitter-Base of transistor is connected in forward bias & Base-Collector is connected in reverse bias. As a result, with the help of majority carriers (hole) the current passes through the emitter base junction. The base is very thin here. So, Its resistance is very high. In the end, we can say that the current doesn’t flow through the base or is near to zero. That is,

As a result, current will reach the collector. Again, the flow of current takes place through both the majority and minority carriers.

So, the flow increases manifold.

The process of making a Transistor

The transistors are a complex combination of silicon. Silicon is a chemical element found in sand. Silicone does not support electricity, which means that electrons cannot come and go inside a silicone. That is the reason we know silicon as a semiconductor. This means it is not a conductor and it is not an insulator also.

We can modify silicon with the help of a process called doping. After that, silicon will start behaving differently. We can “dope” silicon with chemical elements like arsenic, phosphorus, boron, gallium, and aluminum. The type of element we use results in forming p-type and n-type semiconductors.

We learned that there are two types of silicone. Now, we can put these two types of silicone in the same layer in the form just like a sandwich. Only then from these we can make different types of essential electronic components. This is what a diode is. It is an electronic component that we can use to make the current flow in a certain way. You can use this diode to convert a two-way electric current to a direct (one-way) current.

Let’s say we put three silicone layers in our sandwich instead of two. In this case, we can make two types of sandwiches.

Now by joining these three layers of electrical contracts we can create a component through which we can amplify a current or turn it on/off as a switch. In other words, it is a transistor.

The way transistors work on calculators and computers

A transistor works in two ways

We can combine multiple transistor switches to create a logic gate.

A logic gate converts several input currents into different outputs. This logic gate helps a computer make very simple decisions. This decision-making process is done through a mathematical technique. It is what we know as Boolean algebra.

Our brain also makes decisions through this same process. This Boolean algebra has different commands and different situations.

The computer makes mathematical decisions through the correct application of these commands in this situation. The commands are AND OR, NOR, XOR, NOT, NAND, etc. These commands allow the computer to add or compare binary numbers. Again, this is a very basic element of a computer program. Logical series tells a computer what to do, why to do it, and when to do it.

A junction transistor is usually in “off” mode without any current. Again, it is “on” when the current is flowing. This means that an electric current is required to turn the transistor on/off. However, these types of transistors can be modified separately with the help of those logic gates so that these output connections depend on their input. The transistors remain in the “on” state even if the current flows through it. Now every time a new current flow occurs, the transistor starts to turn on/off in the form of “flip”. This process is called flip-flop and it converts a transistor into a simple memory where (if off) a zero and (if on) one number is stored. This flip-flop is the basic technology of computer memory chips.

I hope this explains everything you want to know about, “What does a transistor do?”