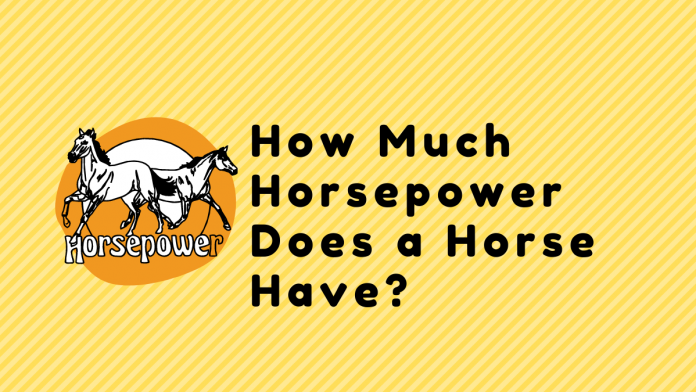 If you are a car geek, you may have a question like: how much horsepower does a horse have? So, you are familiar with the term “horsepower.” But, what really is horsepower, and where did it originate? Is a horse always capable of exerting one horsepower?

What really is Horsepower?

A horsepower is a unit of measurement for power. It represents the pace at which work happens. If you think of ‘work’ as pulling a weight up a hill, ‘power’ is how quickly you do it.

Scottish Engineer James Watt at first was able to relate the output of steam engines to the power of labor horses. It was then used more and more to represent the power outputs of piston engines. For example, uses in automobiles, as well as turbines, electric motors, and other machines.

Relation Between One Horsepower and a Horse

People, who read this article also read: Why does my power keep going out?

Is one horse equal to one horsepower?

A horse’s maximum power output is far greater than one horsepower. In brief bursts, a human athlete may create well over one horsepower; one horsepower is around 746 watts, and elite cyclists can produce 1000 – 1100 watts.

R. D. Stevenson and R. J. Wassersug, scientists, wrote a letter to Nature in 1993 in which they estimate the max power output a horse can produce. According to previous research, the maximum mechanical power per kilogram of muscle is between 100 and 200W. They computed a possible max performance of 18,000W, or roughly 24 horsepower, using the lower bound.

How is Horsepower Calculated?

is the formula for horsepower.

The letters stand for,

The crib sheet for a new automobile has two output numbers for the engine:

If you live in the United States or Canada, those values will be expressed in SAE certified Horsepower (which is the same as horsepower but is SAE certified) and pound-feet.

The outputs are in Watts and Newton meters if you live in Europe. The main distinction between these two sets of units is in the definition.

A Watt is equal to 1 Joule per second in SI units.

Is Horsepower Necessary to Make a Car Faster?

It was very certainly never REALLY tested on a horse. James Watt, the inventor of the steam engine, sought means to represent how much labor a steam engine could carry. Then in the calculation, a horse could raise 550 pounds of weight one foot in one second. However, that is a simpler form of the original measurement.

In general, the more horsepower of a vehicle, the greater its acceleration. This implies it will have superior overall performance, and simply put, more horsepower might mean faster speeds.

How can the term “horsepower” have several meanings?

Unlike time, the precise definition of horsepower can change on the basis of geographical variances and the individual power measuring equipment.

People who read this article also read: What causes an intermittent power outage?

Why do automobiles lose horsepower as they age?

Meanwhile, combustion byproducts can build deposits, preventing engine valves from closing, lowering the pressure that is generated by the burning fuel, and resulting in backfires.

More things to know before buying a car

The original meaning of horsepower indicates the usual power that a regular coal mine horse could sustain over the course of a day. It does not mean the maximum power that a racing horse in top condition can create over a brief sprint.

While your engine may produce 100 horsepower, the numerous mechanical pieces of your car’s driveline will ensure that not all of that power reaches your wheels.

A coal mine owner may think, “Well, we currently have three horses working most of the time,” while James Watt might rank his engines as “two horsepower.”When it comes to your automobile, the most common metric of engine power in the UK is brake horsepower or bhp.

I hope you enjoyed my ultimate guide to your question: how much horsepower does a horse have?

Now I’d like to hear from you: Did you know that horsepower doesn’t actually include horses? Do you think it is beneficial to have horsepower rather than watt?