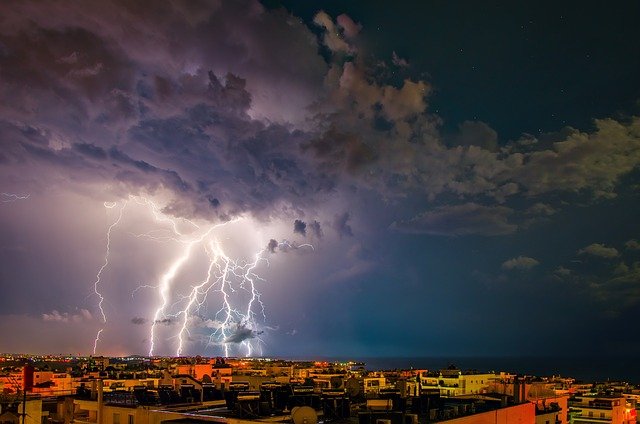 Lightning AC or DC? Have you ever thought about what lightning actually is? Let us find out.

Let us suppose, it is the rainy season. It is raining cats and dogs outside. You are playing Ludo with your little brother. You want to enjoy the day having kacchi biriyani. So, you have gone to the bazaar carrying an umbrella to buy mutton and basmati rice. While walking down the street you suddenly see a lightning strike. Just then something came to your mind. You became curious about this lightning strike. How is this thunder created? Is it an AC or DC signal? So, let us today try to explain lightning AC or DC?

What does it mean by a lightning strike?

During this time, due to the rise and fall of air pressure around the area, we can hear a loud noise.

Some facts that will astonish you

Throughout the world, lightning strikes are happening approximately about 44 times. Now, calculating it around the whole year we get an approximate value of 1400 million. Now, let’s get back to talking about Bangladesh. In the Sunamganj area of the Sylhet district, about 26 lightning strikes in every square-kilometer area within a span of 3 months.

Some useful things needed for the creation of lighting

Usually, three things play a vital role in the creation of lightning. They are:

What is a front?

The front is such an area in which the exchange of two different states of air takes place.

Steps in the creation of lightning

First step: The Circulation of the Cumulus cloud

Usually, there are four types of clouds in the air. Among those, the most recognized cloud is the cumulus cloud. This cumulus cloud wanders around the sky in broken bits. Sometimes, these broken bits join together and form a large cloud that takes up a considerable amount of space in the sky. The initiation of this cumulus cloud is due to the circulation process of heat. This cloud looks like a cauliflower. Mostly, these clouds are seen in a sunny sky. These clouds stay afloat at 4000 feet from the land. Sometimes, these can very easily stay afloat at 20000 feet from the land also. The lower portion of this cloud is blackish whereas the upper portion is white in color. Again, during this time if there is any small amount of rain also, simultaneously lightning might strike.

Circulation is simply the movement of heat from one place to another through a liquid and gaseous medium.

In this process, due to the movement of the atoms heat travels from one place to another.

How the sparkling of light is created?

In a cold atmosphere, you can see ice crystals. The compression of cold water creates these crystals. In the same manner, you can see water droplets in warm air. Due to the severity of the thunderstorm, there happens a collision between the ice and water droplets. After that, then they fall away from each other. In this situation, the static electric charge develops in the clouds. This whole situation can be related to the concept of battery. Just like the battery has both positive and negative ends, the electric state that develops in these clouds also has two parts. The positive end is on the upper side of the cloud.

Similarly, the negative end is on the lower end of the cloud. There is a subsequent negative charge at the lower position throughout the air and this simultaneously moves towards the oppositely charged particle. There is a name for this lightning strike. It goes by the name of leader stroke. This might take a wild stature and strike the land also because the land is also positively charged.

The creation of the stepped leader channel

Before the collision between two opposite charges, there is a need for transportation media. Between the negative charge of the air and the positive charge of the land, there is a vacant space. This vacant space has a voltage difference. This voltage difference after gaining a considerable amount of strength acts as a charge carrier. Now, at this time, there takes place the creation of a root out channel of the stepped leader. This stepped leader is a very unilluminated light ray that comes to the ground during a lightning strike from the lower portion of the clouds. The positive charge of the ground seeks heat from above to create a connection with it. This very thing shows the path from the negatively charged electron to the positively charged ground. This obviously can not be seen with the naked eye.

Second step: the upper and lower movement of the air

In this step, the clouds rise to a height of 40000 to 60000 feet from the ground due to the increment of the heat. During the time of rain or thunder, in these places of the clouds, the upper and lower movement of the air becomes stronger. In the same manner, the thunder also becomes stronger along with these two. These ups and downs of the air movement play a vital role in the creation of lightning.

Last step: the upward flow of the air decreases

In this step, as the upward flow of the air decreases, the lower flow takes the chance. The static electric charge loses its speed. The supply of warm humid air seizes. The supply of negative charge also seizes. During the time of the lightning strike, the difference in electric potential can be up to about 10 million volts. Again, the rate of flow of electricity can rise up to 30000 amperes. This rate of flow depends on the difference in electric potential. During this time, the temperature of the air can rise up to 20000 to 30000-degree Celsius. This huge amount of electric energy stays for a time of only one-tenth of a second. The sound and electricity both are created together. But, due to the difference in speed, we can see the light first and then hear the sound.

How to find out the distance at which the thunderstruck?

One can very easily hear the sound of lightning from a distance of 25 miles. The vibration of sound differs due to the distance. The high frequency is rapidly absorbed by the air. If you are near to the place where the thunder strike took place then, you can hear the sound of the lightning very clearly. With time this sound considerably decreases. As light travels faster than sound in the air, then you yourself can very easily find out the pace where lightning took place.

You can see the sparking of the lightning before hearing its sound. Just after seeing this light, count each second until you hear the sound of the lightning. Sound travels a distance of one-fifth of a mile in a second or one-third of one kilometer in a second. Now, if you want to calculate the distance in the mile, then divide the value by 5, or if you want the answer in kilometers then divide it by 3.

Now, let us come to the billion-dollar question if lightning AC or DC signal? Actually, lightning is just like a two-faced snake. Lightning has both the properties of an AC and DC signal. Because it has polarity and always travels in a single direction, then it can very easily be a DC signal. On the other hand, in DC, there is the requirement for a constant voltage but here it is not constant. It has a variable amplitude. As a result, it can’t be a DC signal. What a pain! This phenomenon is neither DC nor AC signal. Now, surely, you all must be wondering which type of signal will it be? Actually, lightning is an impulse signal.

What is an impulse signal?

Impulse signal is that signal which flows for a very short amount of time but has a huge amplitude.

Why is DC Supply Used in Substations?