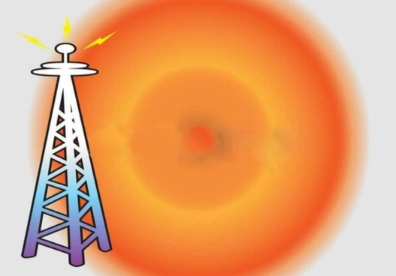 Wireless power transmission system is the process of transmitting wireless electromagnetic waves like Wi-Fi. So this method of power transfer is safe and this method is similar to the way a Wi-Fi router works.

Moreover, the method of transmission of electricity from one place to another without any use of electric wires is very effective.

In this method, ‘source resonator’ or electric coil is made and when power is supplied to it, it creates magnetic field. If another coil can be brought close to it then electric charge is generated from it.

However, in the future, wireless power transmission system will be as easy as using wireless internet. Then it will be possible to charge the mobile phone by keeping in the pocket. So there will be no need for a separate charger for the laptop, no need to connect any cable to the television.

When we hear the word “electricity” we see a picture of a transmission and distribution line standing with a conductor. Have you ever wondered what would happen if electricity transmitted in the open air? The most important thing in a power system is system loss. The main obstacle in the transmission of electricity through the conductor is the resistance of the conductor. So we identify this as a villain in the world of electricity. Therefore, the greater the strength of this villain, the greater the more trouble will arise. So long ago the scientist Tesla proposed to conduct electricity without conductors by means of electromagnetic induction.

What is a wireless power transmission?

The word wireless means there is no wire. Most importantly, wireless power transmission refers to the use of electromagnetic waves from source to load without utilizing the conductors. This technology will be helpful in hilly, island areas where it is difficult to erect poles or towers.

For example, in 1899, Nikola Tesla was the first to propose wireless electricity. He was the first to attempt a wireless power transmission using a radio frequency resonant transformer known as a “Tesla coil”. Then in 1901 he built a prototype high voltage wireless transmission tower known as the Warden Clyffe Tower. Through this, he was able to transmit both information and electricity. Then in 1971 William C. Brown published an article on wireless power transmission. In 2009, Sony introduced the electrodynamic induction power TV with an electric power of 60 watts.

Various scientists have proposed wireless power transmission in various ways. So there are two notable ways.
Like

Firstly, in this method, scientist Nikola Tesla was able to light a neon gaseous lamp located 25 m away from the source. To do this he created a type of wireless power transmission tower known as the “Warden Clyffe”. In this process, a closed circuit was created by creating an ionized path between the transmitter and the environment. For example, there was also another ionized path attached to the receiver edge. The high-voltage transmitter emits a kind of electromotive pulse that ionizes the ambient air. Then the ionized path of air acts like a kind of neon tube.

The limitations of this process:

This method allows microwaves or laser beams to transmit the electricity to the receiver in a well-controlled and straight way.

The application of this technology:

If laser signal uses, there is a possibility of absorption loss.
Using a microwave can interfere with other radio signals.
So we have to keep field strength in safe level or it may be detrimental to human life.

Which country in the world has this technology?

New Zealand is currently using this technology. New Zealand’s Emrod company implemented this technology. So it is basically a microwave electrodynamic induction system. Kilowatt power radiation has been possible in this system and this company is optimistic in increasing the capacity. In conclusion, this system uses transmitting antennas, relays, receiving rectifying antennas through which the microwave signal will be converted into an electrical signal.