What are the Components of a Substation 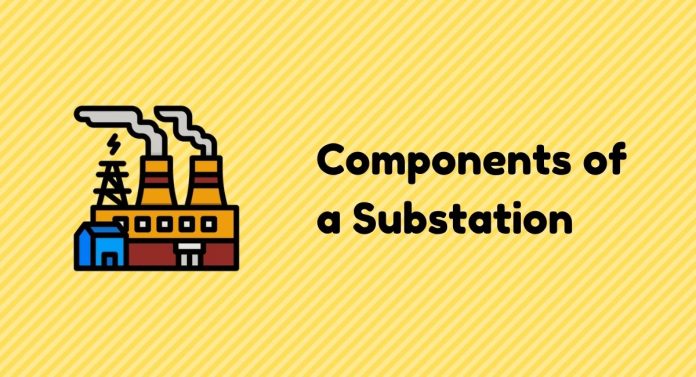 We know that many elements are used for the transmission and distribution of Electric power from the power plants. So, today we will discuss what are the components of a substation?

What are the components of a substation? / Substation Components

A busbar is a kind of copper or aluminum conductor rod, which collects Electricity from one or more circuit and distributes it. Many companies, mills, and factories take the connection from the busbar to their Electric wiring. A hole is made in the busbar by a drill machine and it wears a lug and gets connected by a nut. As people use the bridge for crossing rivers, Electricity uses the busbar to enter one system from another.

Isolate means disconnection. An isolator is a manual mechanical switch, which disconnects any part of the Electrical machine if needed. Generally, an isolator operates in a no-load connection or in offline. There is no special system for extinguishing arch. Many devices in Electrical substations like isolators are used for disconnecting the transformer from the line because of no-load or low-load conditions.

An engineer can set how many times the circuit will open and close if any fault occurs.

We know that it is not easy to measure high voltage in transmission and distribution lines. An instrument transformer (Potential Transformer) is used for measuring high voltage.

The reasons behind using a vacuum circuit breaker

A transformer is a still electrical device. It helps current to flow from one circuit to another, without changing the frequency.

Normally insulator is placed between the conductor and support and connects both of them. Current can’t flow in insulator and so current can’t go to pillar from transmission line.

Lightning means thunder and arrester means to capture. It means if thunder hits the transmission line there is a high chance of getting high voltage in line and causing harm. That’s why a lightning arrester is used for discharging extra voltage on the ground.

That was all for today’s article what are the components of a substation?

Hope now you can understand what are the components of a substation?

If you have any questions on what are the components of a substation, you can ask in the comment section.

You can also read: Discussion about Composite Insulating Cross-Arms

Md. Nazmul Islam
Greetings, I have completed my graduation from EEE background, currently working as an Android Apps Developer. Here is my specialty and I am engaged with it. 1. Android Developer 2. Search Engine Optimization 3. Content Creator If you have any queries or want to say hi, don't hesitate to message me.
RELATED ARTICLES
Substation