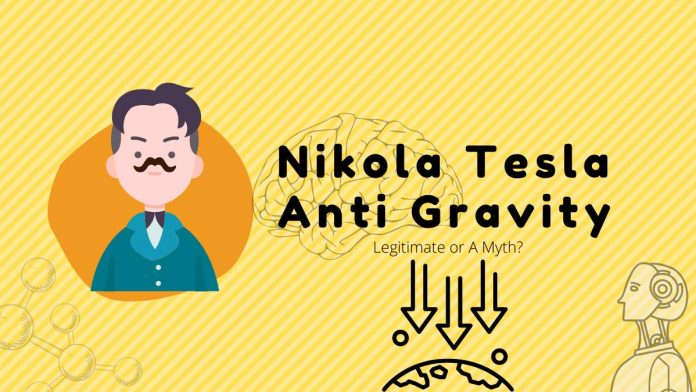 This article’s sole purpose is to enlighten the facts and truths about Nikola Tesla’s anti-gravity. The past is always about what we hear from others. Let’s dive in and try to understand why the anti-gravity concept of Tesla was so controversial.

Nikola Tesla and his Contributions

Our technology today would be considerably worse if the research and inventions of Tesla and everything he did in his time did not exist. Is there, however, anything more to Tesla? Did he, as he openly stated, have contact with aliens? He is one of the most incredible inventors our culture has ever seen. His knowledge and views go much beyond what was known and accepted at the time. Tesla was a genius, and his inventions and ideas were limitless.

Over a hundred years ago, during the first decade of the 20th century, Tesla filed a request to patent a peculiar aircraft that he called the world’s first flying saucer. The methods used in the design of the flying saucer matched the descriptions of those who claimed to have seen a UFO.

Basically, it is an incredibly well-designed aircraft that we could actually manage to build today or have already built. What happened to this invention? Why aren’t we traveling into space using Tesla’s wonderful innovation while the patent is still in effect? The UFO will be a rather cool IFO as it had been identified by the insatiable imagination of Tesla. But it had a drawback since the aircraft did not include an energy source of its own. It needed to be energized by the towers of wireless transmission of Tesla’s sources of free energy. The towers’ construction was halted due to a lack of funds. So eventually, the ship also fell into darkness, and Tesla’s UFO, or rather IFO was never made but held on.

Discoveries that led to the development of IFO

“The Dynamic Theory of Gravity”

It is a theory that describes how gravity changes through time.

Which assumed the existence of a field of force that explains the movements of things in space.

The assumption of this field of force eliminates the idea of space curvature (A.k.a Einstein’s general theory of relativity), and the ether plays a critical role in the occurrences (of universal gravity, inertia, momentum, and movement of heavenly bodies, also as all atomic and molecular matter).

“Energy for the Environment”

There is no energy in matter apart from that obtained from the environment (which contradicts Einstein’s E=mc2) in the Discovery of a substitute physical Truth.

Tesla made a quick reference to the idea in his usual birthday announcement on his 79th birthday (1935), saying it applies to molecules and atoms as well as the most important heavenly bodies, and to all or any matter within the universe in any phase of its existence from its very formation to its ultimate disintegration.

Road to the invention of the Flying Craft

Tesla explained his Dynamic Theory of Gravity in an article titled Man’s Greatest Achievement, stating that the luminiferous ether covers all space. The life-giving creative force acts on the ether, which is flung into “infinitesimal whirls” (micro helices) at near the speed of light, transforming it into the ponderable matter. Matter reverts to the ether when the force subsides and motion ends (a sort of atomic decay).

These procedures can be used by man to precipitate materials from the ether. With the substance and energy obtained, he can create anything he wishes. Change the size of the earth. Control the seasons of the earth (weather control). As if you were in a spaceship, guide Earth’s journey through the Universe. Cause planet collisions to create new suns and stars, as well as heat and lightweight materials. Create and develop life in an unlimited variety of forms.

Rather than appearing at a conference when he was 82, Tesla made a written remark. Despite the fact that he had just been hit by a car, his intellect was clearly capable of waging an attack against Einstein’s theory of relativity.

“I’ve figured out a dynamic theory of gravity in all of its aspects, and I’m hoping to make it available to the world very soon.”

It adequately explains the sources of this force and, as a result, the motions of heavenly things under its influence, putting an end to useless theories and fallacious notions like curved space.

Due to an intrinsic quality or the existence of celestial bodies, relativists believe that space has a propensity to curvature. Even if the current spectacular concept has a semblance of realism, it is still profoundly self-contradictory. Because every action is accompanied by an equal response, the latter’s consequences are diametrically opposed to the former’s.

Assuming that the bodies impact the surrounding space, generating curvature, it appears to my basic understanding that the curved spaces must react to the bodies, straightening out the curve by producing other effects.

Unfortunately, Tesla never explained what brought him to his current opinion. Before that, he died.

He never conveyed his gravitational theory to the planet. The scientific community at the time thought his attack on Einstein’s work was ridiculous, and it is only now that we have enough understanding of gravity to comprehend that he was correct.

The Mystery that Remains

Let’s think about it for a minute.

Tesla’s papers are hidden in government vaults for national security concerns. Lyne observed that more detailed remarks about these findings could only be extracted from dispersed and scant sources while investigating Tesla’s utterances. In 1979, Lyne requested these files at the National Security Research Facility (now the Robert J. Oppenheimer Research Center). But he was denied access because they were still secret.

Tesla stated in his 1938 presentation that he was making progress on the project and wanted to present the concept to the world very soon. Eventually, it didn’t happen.

Fact about the Saucer

When the hull rotates anticlockwise, the concentric ring/ ring revolves freely in a clockwise way, and when the two components’ speeds meet, the entire vessel flies to the bottom.

Was Tesla’s Model similar to Otis’s?

Otis T. Carr, on the other hand, did construct a machine based on Tesla’s idea. Although the vessel has nothing to do with anti-gravity and everything to do with mass and field alteration by electromagnetic waves of specific frequencies.

As you can see, Tesla never built this craft, and it has nothing to do with anti-gravity technology. However, some of the ideas established by Tesla have been integrated into the design of this craft.

It’s no wonder that Tesla experimented with flying and, maybe, anti-gravity. In fact, his final invention, issued in 1928, was for a flying vehicle that looked like a helicopter and an airplane at the same time. Before he passed away. Tesla allegedly drew out ideas for a spaceship’s power plant.

People who read this article also read: True Story of How Einstein’s Brain Was Stolen for Science

“The anti-electromagnetic field drive”, or “Space Drive”, was his name for it.

Tesla stated in his 1938 presentation that he was making progress on the project and wanted to present the concept to the world very soon. But, sadly, that did not take place. Tesla left us without spreading light on Nikola Tesla’s anti-gravity

Is it true that Tesla worked on anti-gravity technology, or is it only a legend?

Different people have different perspectives regarding the truth about Nikola Tesla’s anti-gravity.

It is a “misconception” that Tesla worked on anti gravity technology. It has since been lost. He also isn’t the inventor of three-phase electrical distribution. He is frequently credited for it. Mikhail Doliva Dobrovolsky, a Russian engineer living in Germany, was the first to demonstrate polyphase power. He utilized it to transport hydroelectric power over long distances to power an exhibition in Frankfurt am Main, Germany, in 1891.

Tesla patented a polyphase motor around the same time. He subsequently admitted that his idea was identical to Dobrovolsky. Dobrovolsky didn’t patent his innovations out of a (possibly misplaced) feeling of civil obligation.

Tesla, on the other hand, was employed by Westinghouse, which was eager to promote him as the great genius behind the new electric era. But sadly Dobrovolsky was championed by no one. As a result, the Tesla myth flourished in the American press. Millions now regard him as a cult figure. A decent American misunderstood lone inventor. Although the fact is much different.

People have idealistic fairy tale ideas about Tesla being a genius who was one-of-a-kind in time and space. He was a brilliant man who devised a number of useful innovations, most of which were connected to electromagnetism. However, he did not make any significant advances to science in general or physics in particular that are not now deemed outdated or surpassed.

We would have anti-gravity now if Tesla had found any physics related to it. Anti gravity weapons would be used by the US military because several large firms would be producing pile-building anti-gravity equipment. None of this is true.

Tesla was an excellent inventor and engineer. He made a significant contribution to the early twentieth-century electrical infrastructure. But he was just one of many such contributors, and he was less successful in his pure scientific pursuits. His focus on practical experiments and lack of theoretical grounding led him to waste energy on things like through-the-air power transmission and death rays, both of which were unworkable even at the time.

Tesla never worked on anti-gravity, he did spend much of his adult life tinkering with his own “Dynamic Theory of Gravity,” which he claimed would

“put an end to idle speculations and false conceptions, such as that of curved space.”

He was claiming to oppose Einstein, which might be quite an achievement. But Einstein has been experimentally confirmed to precisions Tesla couldn’t have dreamt of. On the other hand, Tesla’s theory, if it ever truly existed, managed to fade utterly from his papers.

People, who read this article also read: Why did Thomas Edison Electrocute an Elephant?

“Man’s newfound compassion began to interfere with nature’s harsh functioning. Stopping the breeding of the unfit by sterilization and careful guiding of the mating impulse is the only approach consistent with our concepts of civilization and hence the reforestation of the race… The consensus among eugenists is that we should make marriage more difficult. Nobody who isn’t a desirable parent should be allowed to produce children. It will not occur to a conventional person to mate with a eugenically unsuitable human in a century’s time any more than it will to marry a recidivist.”

If this statement were your only guide to the man’s character, you would possibly well judge him with Hitler. But he also spoke in favor of women’s equality, and through the second war, sought to develop a death ray in support of the allies.

Let us know by commenting below if you want more articles like Nikola Tesla anti gravity.